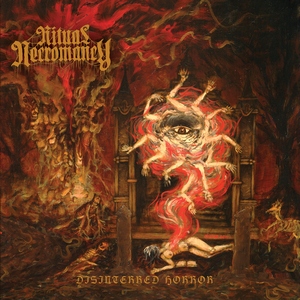 In continuing what seems to be one of the larger portions of today’s death metal movement, Ritual Necromancy dust off their favorite Incantation albums and make their attempt to traverse the same, oozing, sludgy, and doom-infested waters of the pioneers before them with Disinterred Horror. The band’s second full-length sees them give it their all in this area. While the end result is familiar in tone, it’s still done with enough finesse to keep it interesting.

Truthfully, the doom-y, cavernous sound of Ritual Necromancy doesn’t take more than the mere Incantation references to give you the general idea of what they are doing. They switch things up from feral and blasting to funeral-esque crawling within the span of one song, while hitting the tempos in between as necessary. The five songs tend to be on the lengthier side of things, other than the notable 4.5 minute ripper that is “Command the Sigil,” which works to their advantage as they allow for plenty of transition time while still not going too far overboard with it. There’s a natural flow set into motion, particularly on the 11-minute “Cymbellum Eosphorous,” which seems to relish the sinister and slow riffs as it descends into a bit of madness. But more throttling numbers, like the title track, maintain a similar focus as they volley between speed bursts and lumbering doom. Also helping them out is a more clear sound than many of these acts attempt (though it’s still quite cavernous in execution), which helps out some of the melodic leadwork that comes into play.

Though some moments feel very Incantation-y, Ritual Necromancy rise above it due to sheer force of will. They grasp the intensity needed at the speedier end, and are willing to embrace the rotten, doomier elements with just as much care. A sure-fire winner for those who crave this sort of thing.