Replacire – Do Not Deviate (Season of Mist) 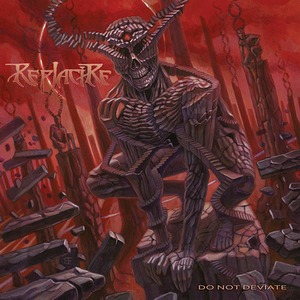 Boston-based extreme act Replacire first arrived onto the scene with an independently released album entitled The Human Burden (available on Bandcamp). Those who stumbled upon it surely heard some promise to the band’s interesting approach of death, progressive, and even mathcore. And though it may have been more of an underground discovery, it got the attention of Season of Mist, who have released their equally frantic and chaotic sophomore effort Do Not Deviate.

Do Not Deviate takes off from the promise of The Human Burden – building upon what worked and putting it into a more cohesive gel. The multi-genre approach that encompasses death metal in many varieties (brutal, tech, progressive, you name it) also merges with progressive noodling and an almost mathcore complexity and spastic-ness. What’s most surprising is how well it all comes together. Each track is streamlined in its attack, with quick bursts of aggression and crazed technicality, as most cuts stick to the 3-4 minute range. It could easily make for a jarring listen with the way it’s condensed, but instead you’ll be drawn back, not only for the adrenaline rush, but for the engaging mix of both brutal and somehow melodic/progressive elements. Opener “Horsestance” rapidly introduced many of the elements that become mainstays over the course of the album – frenzied and tech-laced riffing, proggy melodies, and visceral grooves find a symbiosis while Evan Anderson Barry (Wilderun) unloads some menacing bellows (along with some lesser used cleans). Other highlights include the crushing grooves that accelerate into violent, prog fireworks in “Act, Re-enact,” melodic soloing of “Moonbred Chains,” pummeling deathly riffs of “Any Promise,” and the more progressive and melodic Opeth-esque sensibility of “Spider Song.”

Obviously quite a bit to take in despite its short run-time, it’s easier to just say that Do Not Deviate is packed to the gills with explosive moments that will dizzy the listener with glee. While you can sit around and dissect the album’s more intense technicality, it’s easier to just enjoy it in the moment for its engrossing brutality and neck-breaking charm. Truly the best of both worlds.