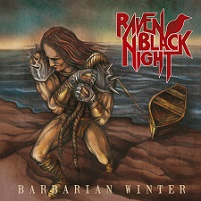 Take it from someone who used to be in a band with singer(s) who had the capability of singing in falsetto: It’s an easy target for people to rip on. Bands who used to inhabit the same rehearsal space as ours would often jokingly mimic falsetto during our in-between-song breaks. Reviewers and message board trolls would occasionally deride our use of it too. By employing this vocal style, you leave yourself open to criticism, which my band totally understood. Raven Black Night, though, might have missed the memo.

On their sophomore Barbarian Winter album, this Australia-based power metal quartet roll out a rather familiar brand of proto power metal; a bit like Savatage in their prime, perhaps more Manowar than they initially appear. While there’s plenty of gallant melodies to be found on “Morbid Gladiator” and “If You Choose the Dark,” the unbearable falsetto squeal of singer Jim the White Night is a total album killer. He’s both out of key and annoying throughout the album’s 12 cuts, with some really tasteless moments on “Mystery Woman,” “Black Queen” and “Lips of Desire.” He could be the worse rafter-reaching singer of our time, perhaps worse than any King Diamond/Halford impersonator…

Bands: If you’re going to use someone with a paint-peeling voice, make sure the vocal selections are done right and in good taste. Barbarian Winter is the utter definition of bad.