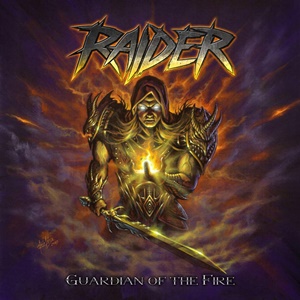 Waterloo, Canada is home to Raider – a five-piece outfit together since 2017 who have released a demo in 2018 Urge to Kill setting the stage for this full-length Guardian of the Fire. Finally securing a full-time lineup as second guitarists have been used on a live basis, the band also differ from most currently parading their sound because of standard E tuning, giving their thrash/death style distinction and possibly a bit more conventional bite than most. In the end, these eight tracks combine influences from their domestic Canadian roots as well as American finesse and aggression to illustrate the power, precision, and musicianship that keep Raider in league with acts like Annihilator, Exmortus, and Skeletonwitch as far as melodies, hooks, and darkened, savage attacking mechanisms.

Many of the main structures contain the proper balance of power riffs, gallops, and intricacies in the transitions that keep toes tapping, bodies flailing, and hair windmills mandatory for worshipping as “No Sign of the Dawn” and “Ravenous Hydra” obliterate the aural landscape. Guitarists Gabe Rosa and Ira Lehtovaara have fleet fingering and deep affinity for chunky rhythms plus solid lead break mechanics – right away on opener “Bound by No Fate” it’s evident that a love of Jeff Waters, Dave Mustaine, and even acts like Carcass or Sodom come into the forefront, adequate shifting up and down the tempo scale while injecting the proper neoclassical twists or harmony tricks. Building up specific musical moments with layers of atmosphere, the title track for instance is a standout as singer Angelo Bonaccorso uses his measured blackened raspy delivery to match the lurking riffs before the pace reaches mid-tempo gallop comfort levels, drummer Kevin Withers gaining a chance to showcase his double kick/time signature juggling abilities throughout. Because all of the songs sit in a five to six-minute plus arrangement dynamic, the listener can expect plenty to digest on the vocal/musical fronts – but melodies always abound, in a thrash, power, or death context, so as to not go super-technical and lose the plot song to song.

Raider are one of the newer breed of bands willing to keep melody in mind as they develop their death/thrash mixture of influences. Those who love a less sophisticated Exmortus with probably a stronger Annihilator meets Sodom feel to their sound will find Raider right in their aural wheelhouse.