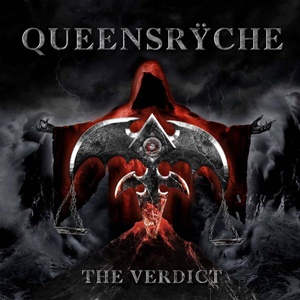 Subsequent to the division of Geoff Tate and the rest of Queensrÿche in 2012, it’s been an uphill climb to reestablish the legacy and style of this veteran progressive metal outfit. There’s no questioning the impact of the 1980’s output through the commercial breakthrough Empire in 1990 – including one of the best concept metal records of all-time in Operation:Mindcrime. The Verdict is the quintet’s third studio record with Todd LaTorre on vocals, also performing double duty in the studio as a drummer following the departure/ self-imposed sabbatical of Scott Rockenfield. Now that the band has had time to collect their thoughts, focus on their strengths, and prove to the legions they can deliver the goods with this lineup live – it’s apparent that Queensrÿche fear no fallout to churn out their most impressive effort since those legendary early years.

Busting out right away with a catchy opening anthem in “Blood of the Levant”, the lean mid-tempo verse crunch and subsequent layers of guitar play from Parker and Michael allow Todd to ascend to those piercing falsettos during the bridge and chorus. Firm, brooding chord action and semi-shred elements bring “Man and Machine” into throwback terrain, almost to a “Deliverance”/ The Warning prism, given more punch and polish courtesy of Zeus as mixer/master/producer. Alternative, ambient picking against chanting and tribal percussion movements gives “Inside Out” that outer cultural atmosphere, Todd showcasing some progressive push and pull and entertaining vocal harmony output on this highlight. The band shift straight-ahead affairs with calmer, dynamic efforts – “Dark Reverie” illustrating the contrasts pulled together for an intense, heady experience because of the heavier chorus, spacious keyboard infusion, and then reflective, sparse verses that allow for Todd’s expansive range to shine. Most of the material stays in radio-friendly time confines, but when the band choose to stretch for the almost six-minute “Bent” their progressive intricacies shine – nifty tempo changes, stop/start mechanics and distant to forefront vocals all swirling into a hopeful Queensrÿche future classic, the lead break featuring a mixture of harmony executions and David Gilmour-esque melodic textures.

Even as a relatively shorter 45 minutes and change record, The Verdict succeeds at putting Queensrÿche near the top of their game in melodic progressive metal. They use the tools at their disposal for the digital age properly, while ensuring human connection on the lyrical and musical levels. Not content to live off the back catalog, their new songs possess just as much force for the community – and deserve to be heard, absorbed, and appreciated.