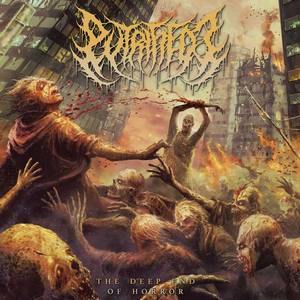 Let’s not kid ourselves – brutal death metal and slam exist for one sole purpose: to inundate the listener with sonic brutality. It’s barbaric and over-the-top and leaves little room for subtlety. Much of it gets bogged down by the repetitive nature of what it is. You just can’t go at the listener for 30-40 minutes with straight aggression with no let up. Which is why the 12-minute EP that is The Deep End of Horror ends up being quite effective.

As already noted above, no one is walking into this one with expectations of grandeur. The two-piece that is Putrified J aren’t going to do much differently than the rest of the brutal death metal bands out there. There’s moments of furious speed and some churning grooves that sit atop of some inhuman roars. Textbook stuff for the most part, and there’s nothing wrong with that. Brutal is as brutal does. But if there is one area that did start to stand out as the EP went on, it was the inclusion of some melodies into the mix. The longest track (we are talking 2.5 minutes here), “Seeds of Infamy,” not only lays down some nasty grooves when they slow down, but the melodic aspect to the song is notable and creates some eeriness to the track. Some other tracks do this to a lesser degree, but it’s really something here, especially with all of the bulldozing destruction that goes on at the same time.

Really short but sweet in the end, nothing gets dull on The Deep End of Horror. You can insert any and every clichéd description of brutal death metal to describe it, but the fact of the matter is that it stays fresh and it never really overdoes any one particular aspect. If you dig bands like Devourment, this is definitely up your alley.