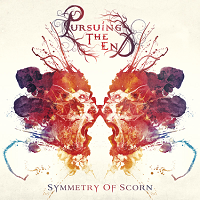 This probably didn’t happen, but DR imagined the six gentlemen and one lady that comprise of Pursuing the End sitting in the studio after the completion of Symmetry of Scorn, suitably pleased and of the belief they are a unique entity. Then, some hanger-on of the band plops down the latest issue of Metal Hammer magazine on the break room table and goes, “These guys are totally stealing your sound!” After the ensuing internet research and fact-finding wraps, a buzzkill moment for the ages happens: Pursuing the End realize they’re just a Junior Deadlock.

Unlikely imaginary scenarios aside, the band’s debut Symmetry of Scorn is template-wise, indeed a lot like Deadlock. Melodic death metal is the foundational item, female vocals of the poppy variety lend the saccharine, gruff vocals are in the house, and dance/techno “flourishes” enter the sonic spectrum for unknown reasons. So yeah, everything Deadlock has been doing the last three albums.

Never the matter, as Symmetry of Scorn does have some merit in spots. The bristling “In Vain” is punctuated by Gothenburg melodies and flashy guitar solos; “Cage of Hypocrisy” is the biggest benefactor of the dual male/female vocal approach (Chiara Manese sometimes has too thick of an accent, though), and the gussied-up “Mercyful Vengeance” (love the intentional improper spelling of “merciful”) and title track both engage with extreme metal elements (blast-beats and death metal riffing) to moderate effect.

Based on the band’s lineup formation and dalliances with techno/dance music, Symmetry of Scorn is going to be a tough bag for even the poppy melodic death metal crowd. And since such a limited space is already occupied by someone else, Pursuing the End might want to contemplate a different approach altogether. People have a hard time making distinctions these days.