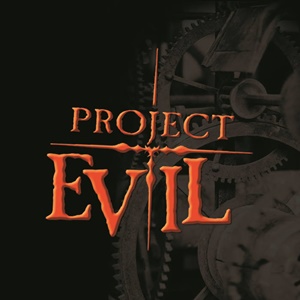 Another discovery through the Bandcamp platform, Project Evil hail from Italy – a quintet intent on living for a classic heavy metal style on this self-titled full-length. Little else is known to give you background context – my search skills through the normal internet/social media resources coming up rather sparse on that front. Rest assured, these seven songs champion epic melodies, stirring rhythms, and a stripped down, in your face production quality that conveys much affinity for the 70’s/80’s metal scenery.

You can expect guitar interplay and main song structures that take NWOBHM influences and morph them into slightly wider textures – occasionally gaining a gallop nuance or shifting into doomier pastures. Something like “Fading to the Sun” keeps a steady mid-tempo feel with an incessant, easy on the ears chorus not unfamiliar to fans of Satan – while the follow up “Pulsanda Tellus” intertwines acoustic/electric action during the opening before building a churning, epic doom context a la Dio-period Sabbath. Gianni Iapichino has that vocal quality to take Project Evil to the right places – confident in his bellowing, proper in phrasing as well as hitting those upper echelons when appropriate (think a cleaner Robert Lowe). Conversely there are times where you just wish the drumming would be a touch more forceful and passionate – laying back a little in those 4/4 segments for the title cut and parts of “Poker of Skulls”, leading to mental distraction (or ultimate boredom), depending on your point of view. And how can you not smile at historical lyrics that discuss ‘Robbing gold from scurvy others/ In the name of Davy Jones’ plus realistic narrative/evil supplementation for dynamic effect on a latter highlight like “Bal Sagoth”?

Within the almost 37-minute record, it’s clear to hear that Project Evil prefer to align themselves in the 1975-1985 heavy metal years – and as such should gain appeal through ardent classic/epic-oriented followers. Potential is present, which hopefully gains momentum given time and experience under their belts.