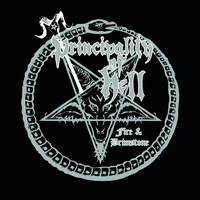 Principality of Hell are a new band but the musicians are old. Thou Art Lord’s The Magus, El and Maelstorm are credited with various works. Their pre-established career as musicians is bait for attention but, as they say, easy come easy go! These wannabee rock-stars attempt old-school metal by indulging in the nostalgic 80’s power-hungry attitude with thrashy riffs and adding mild shots of black metal. It’s all-too powered by ego and pretty pathetic. Maybe appealing to elder generations of metal-heads and/or juvenile punks who somehow convinced themselves they were born in the wrong generation, you all know who you are.

With arrogance and falsified pride, they try to be many things but what’s really going on is they’ve used artwork, logo, themes and other masks to fit into certain categories and create a specific image. One major issue is the image seems forced, more of an act than anything. Naïve newbies might fall for this act of theirs. I must mock the album cover, classic Baphomet symbol with their logo over it, the logo which was the winner of a facebook-hosted competition. Tisk, tisk. Musicians, please remember DIY.

They think they’re the new Venom but it’s a pointless effort. There’s a lot of copycat imitation and barely enough innovation to make up for it. Furthermore, they could’ve/should’ve fixed it rawer. The mixing and editing makes it sound mainstream, so spit at it. The whole album sounds like it’s pushing to be something it’s not. These things make them seem like amateurs and/or posers.

“Satanic militia! Legions of hell fire!” – Typical satanic war metal lyrics. “Hellfire Legions” is a decent song but, like the others, the poppy upbeat gets old fast. The woman screaming bloody murder in “The Bleeding Nun” justly enhances the song, horrible yet oh-so favorable in comparison to the others. Don’t even get me started on their cover of Exodus’s “Strike of the Beast,” that song wasn’t that great in the first place but POH managed to make it worse. That being said, I think we’re done here.

Yes, I gave POH a semi-negative review. Everyone’s given them too much credit. You know what? Someone had to say something, nay not yay. Go ahead, bring on the spats of disagreements! I listened to this record enough to see past cliché distractions and have an honest change of opinion, breaking from this brainwash of bullshit. I went from keen to mean, not because I was sick of it but I realized it bites the dust and I know they could do better. Many will do the same and forget about it in good time, it’s not something worth coming back to.

Look out for more of their too-lazy-to-do-their-own-thing competitions and self-absorbed promotions!