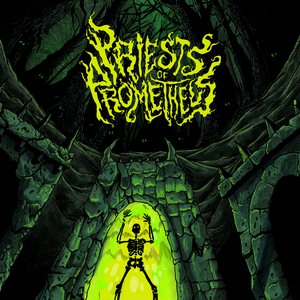 Often all it takes is to do something a little bit outside of the norm to get some attention. Take the death metal genre for instance. There’s an expectation for bands that play within the sound, and when a new band attaches some tags like Cannibal Corpse, Suffocation, and Dying Fetus, it further develops a sound and image of what to expect. With this exact tags, the one-man act (of Justin Wolz) of Priests of Prometheus manages to turn some of these expectations on their head, while being true to said inspirations.

Lodestar starts off straight-forward enough with the first two tracks of “Omnigore” and “Darkened.” Both tracks have some absolutely ripping moments, and are quite brutal and direct in their attack. There’s some melodies and groove here and there to keep it interesting, but it definitely stays quite true to the musical influences at hand. Nothing wrong with some more old school sounding bludgeoning though, and it’s a solid first half for those into death metal. But far more intriguing (and promising) are the last two tracks. “Lacuna of Forgetfulness” brings in some more off-time rhythms and technicality as well as a greater vocal variety. Stepping further away from the sheer brutality at points, it makes the track feel heavier when said elements return. The near 9-minute closer in “Enlightened” (riffing off of the concepts from “Darkened”) is the most jaw-dropping. It starts off with some almost folky elements and brings up a completely different vibe, which builds surprisingly well into the more brutal sounds to come. Some chanting/ritual-esque vibes weave in playfully with the chunky riffs and grooves, giving the feeling of something much more mystical than the songs that precede it.

Some might say Lodestar is a bit all over the map, but it presents itself well. The variety is always appreciated, and a further melding together of the influences that dive into each song here could result in something that feels entirely fresh and unique within the death metal realm.