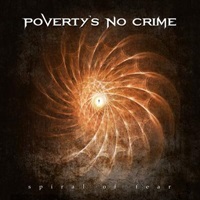 Avid followers of heavy metal understand that output on the musician side as far as records doesn’t pay the bills these days – at least at a comfortable rate from the 1980’s or 1990’s perspective. So the extended nine-year break German progressive metal band Poverty’s No Crime took following Save Your Soul to their seventh studio offering Spiral of Fear can’t be surprising – as raising children and attending to family matters became the priority. Refreshed and ready to serve up another intriguing platter, this quintet continues to fly under the radar in terms of popularity – yet shouldn’t as they construct exhilarating songs chock full of smart hooks, exciting dynamic transitions and melody/ harmony aspects coming on all fronts vocally as well as musically.

Much like the UK’s Threshold, songs such as “The Longest Day” and the instrumental “The Fifth Element” may not capture a wide swath of amazement for dazzling runs or intricate interplay between say the rhythm section or the keyboardist/guitarists – instead it’s all about the construction and where the mood flow takes you, as bass parts can pop out one second, then a subtle keyboard refrain the next, while other instruments stride along providing the sturdy foundation for retention. Volker Walsemann and Marco Ahrens infuse a number of subtler, softer textures against their normally heavier riff parts – most evident on the appropriately titled “The Ballad of 91”, something you would expect from possibly Kansas or Marillion, the shorter twin harmony bursts heightening anticipation as the seven-minute track squeezes out a lot of emotional energy. Meanwhile the vocal harmonies during “Dying Hopes” are the stuff of AOR/ progressive rock legend – volleying against the stair step rhythmic nature of the arrangement, spacious and elegant all the same.

While the average track among the eight stretches to seven minutes, Poverty’s No Crime don’t elongate material for the sake of excess – constructing and intertwining their abilities in a logical manner as to be melodic and hook-laden even in the subtle off-time tempo changes or layers of guitars, keyboards and bass to process. Rush and Enchant followers for certain will champion the brilliant title cut –8th note dotted action, a pulsating keyboard underpinning and an infectious vocal melody throughout the verses and chorus making this one of the band’s best songs to date. Together since 1991 and a staple of the fine Inside Out Music roster for a while (One in a Million and the aforementioned SoS personal favorites), maybe the move to the smaller, German-based label Metalville could pay dividends in reestablishing ties with the scene and possibly gaining a foothold with newer people. Spiral of Fear puts a lot of the old progressive metal guard’s latest efforts to shame (The Astonishing anyone?), and should be mandatory for those who enjoy song-oriented progressive metal that goes for the overall outcome over individual ‘stun’ moments. Welcome back.