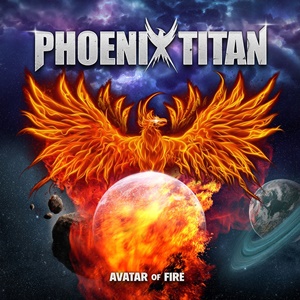 Experience can advance efforts for any newer band. Collectively gaining twenty years of recording/live action before coming together as Phoenix Titan, this Finnish quintet began in 2014 and finally unleash their debut full-length for Avatar of Fire. Knowing that you need to make a great first impression, the band admits they took their time crafting the right sounds, tones, and production to be proud of every aspect for this release. After numerous spins, these nine songs sit in that melodic/traditional metal slant that feature catchy riffs, proper harmony nuances, and a powerhouse vocalist that indeed makes a potent difference for sustained attention and appreciation.

The higher register and forceful nature of Harri Ahola carries its weight in aural golden moments throughout – right away the opening verses and chorus for “Torment of Vanity” teaming with aspects of Bruce Dickinson/Geoff Tate and other offspring for power, presence, and proper phrasing. His compatriots on the music front lay down a great foundation of fist-pumping riffs and transitions – laying in that Accept/Judas Priest pocket for a mid-tempo anthem like “Metal Shark” (complete with the gang background title chorus / ‘hey’ chants and a super-bluesy shred lead break). Drummer Tatu Rautiainen knows when to hit the right metal groove but also showcase some flair for the fills during another standout “Ride for Vengeance”, flexing some Scott Travis-ish double kick/quick rolls at the right times against the driving rhythms and occasional guitar melody accent. You’ll also get some salvos from guitarists Topi Vuorela and Santtu Rautiainen that resonate with Maiden during their Murray/Smith 80’s heydays – check out the main hook for “(In)Sanity” that has some spiderweb / circular charm. And it is clear throughout the band delivered a sterling production – rich tones that lift easily through your speakers, just the way you expect a melodic/traditional metal record to sound.

Younger bands could learn a thing or two from Phoenix Titan when it comes to critical idea execution, laser sharp focus on all the key parts that make a song distinct and memorable. Avatar of Fire will be another fine album to add to your collection if you like heavy metal with that Finnish finesse and respect that makes you scream, shout, and headbang along in all the right places.