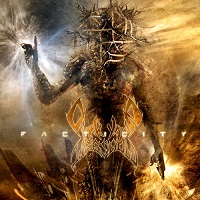 Someone needs to send out a search party for Necrophagist…and fast. The European technical death metal throne they once manned has been toppled by Obscura, thus opening the doors for bands of lesser ability. Well, not necessarily lesser ability – lesser “awesomeness.” This is what happens when you haven’t released an album in eight years – every label goes on a manhunt for the next version of you, while you sit at home

Metal Blade’s entrant into the “Let’s find our own Necrophagist” derby is Germany’s Over Your Threshold. On their Facticity debut (they formed in 2006…right at the height of Necrophagist’s popularity), this quintet is able to cajole nimble-fingered guitar work with a frenetic and overbearing pace. No one in the right mind would balk at the maelstrom songs like “Cortical Blindness,” “Self Exhibition” and “Body Part Illusion” kick up, in spite of their rather derivative nature.

The big knock on Facticity is its overall flatness. The production job has a lot to do with this, but listening to this album evokes visions of these dudes in their practice space staring at their fingers, prepping for a live gig so they can…stare at their fingers. Big ups to bass player Christian Siegmund – dude could be the next Steve DiGiorgio. Unfortunately, Over Your Threshold is neither the next Necrophagist nor Death. We won’t get another album from Death and at the going rate, the same will more than likely apply for Necrophagist.