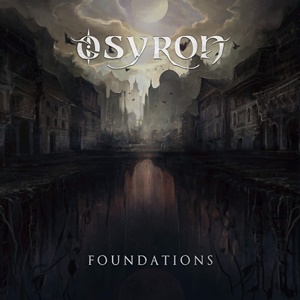 Forming in 2012, Canadian act Osyron is a progressive metal quintet with a mixture of North American and European influences who have released two previous full-lengths with Harbringer in 2013 and Kingsbane in 2017. Those records set the stage for this EP follow-up Foundations – a five song effort that showcases the exploration of Canadian history and identity as well as stronger songwriting due to all five members contributing to the process. Melding together a mixture of modern progressive, power, and symphonic textures allows the listener to experience a wide array of musical ideas expressed in full color – incorporating intricate interplay as well as exuding lower, groove-oriented tones and exotic atmosphere when necessary.

Everything from dramatic acoustic guitar embellishment to semi-djent meets Kamelot-ish chord constructs easily help differentiate the aggressive “Ignite” from the quiet building / folk to electric cultural charm of the follow-up “Battle of the Thames”. Mixing up shorter, straightforward outings along with the epic, sprawling song or two ensures diverse appeal, never remaining stuck or stagnate in one specific mood. As a matter of fact, there’s a decidedly arena rock/ uplifting aspect to “The Ones Below” that could be a breakout song for the band, solid bluesy/ high-pitched powerhouse vocals matching up to the killer main guitar hook and supporting rhythm section groove. The eight-minute plus title track closes the proceedings, another whirlwind of contrasts as it opens very softly with quiet melodies and soothing keyboards before the progressive bass lines and chunky guitars kick in, ensuring another head spinning outing with militant/cultural matchups between the singing and musical underpinning which makes this scribe think of Nightwish and Dream Theater. Within these 28 minutes there are layers to absorb, ideal for Osyron’s burgeoning appeal to audiences not just in the normal progressive realm, but also those who love modern production and darker tones.

Foundations puts the band front and center for another Canadian breakthrough to a worldwide audience. Osyron succeed in creating a musically catchy effort that also contains some interesting twists and killer interplay when necessary – and should be a band to keep tabs on.