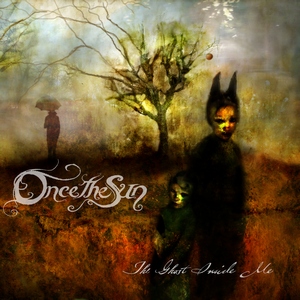 As the gushing usually goes, the greatest joy of spending hours on Bandcamp is finding that one band with so much potential that you would not have discovered otherwise. The latest example is that of Milwaukee-based act OncetheSun, who have been hard at work for over 10 years with a number of releases. The Ghost Inside Me is their latest release, and sees a band ready to ready to step up to the next level.

The sound of OncetheSun takes the darkened metal/rock of a band like Brave, complete with well-injected keys, approaching gothic/doomy territory but never really going fully into it. A complete fusion of metallic riffing and rock hooks, relying on the stronger aspects of both – solid songwriting composition and generating a dark and somber atmosphere from beginning to end. There’s only six songs per say, but they are surrounded by some interludes/intro (3 in total) that actually serve a purpose. Many bands are happy to toss in these type of things to pad the runtime, but these work as bridges between the tracks, even including a clever name tying the tracks together (“Breathless” separates “Asphyxia” and “Speechless”) – maintaining the mood of the previous track and flowing into the next one. It’s a little attention to detail that ends up strengthening the album. The band has a strong vocalist as well in Anna Bohn, who can provide an emotive presence when called for, accompanied only by keys in the beginning of “Chokehold,” but can also provide the needed power in the album’s hardest (and probably strongest) cut “Asphyxia,” going as far as to provide a few screams to elevate the mood. All in all, the music is compelling and diverse – hitting a range of ideas while keeping their intentions and sound completely genuine.

A thoroughly impressive introduction to this emerging act, The Ghost Inside Me is bound to have plenty of appeal within the metal or rock circuits. OncetheSun provide a great balance of heavy riffs, soaring vocals, and somber atmosphere that equally handles power and grace. An underground gem that’s primed to explode.