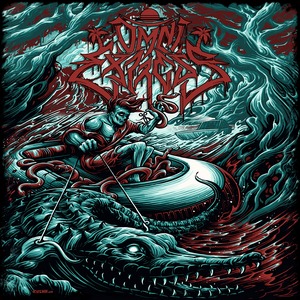 Does the idea of synthwave slamming death metal get your attention? It probably should, though the initial thought to the concept is probably more like, “WTF,” than one of discovery and excitement. Well, let Omni Express guide you through this unexplored territory in a way that will make you realize the possibilities of such an initially odd combination.

Utilizing a sound that digs in heavily from the current synthwave moment as well as some video game-y electronics, it actually helps to rectify one of slamming death metal’s greatest flaws: monotony. With the utterly devastating formula being one that tends to put people off due to the uncompromisingly heavy aspect, both instrumentally and vocally, the major electronic component helps to give it a large breath of fresh air. The deathcore and slamming elements are entirely genuine in their execution, as the monolithic crunch of a song like “Sewer Alligator” can attest to, but the ‘80s synths give it an eerie vibe that takes it in different directions entirely. It’s more cinematic in sound, not to mention more listenable – giving it some hooks that wouldn’t be there otherwise. While the vocals are entirely make it/break it in their guttural flavor, it is more approachable to other extreme music fans and more importantly, it totally works. Hotline Miami vibes are strong as the title track opens with bouncy synth beats, and as the rest of the music picks up the pace, there’s an oddly catchy air to it. The synth-heavy cover of KoRn’s “Blind” closes the album, and it’s also a good example of how this particular combination can make a track sound unique. Pulsing synths merge with that quickly identifiable riff and give it a really distinctive sound – a great twist for a cover track.

Bringing together two sounds that seem like they shouldn’t work at all into a cohesive and exciting package, Omni Express have a fresh and thoroughly intriguing vibe. Fans of either slamming death metal brutality or ‘80s inspired synthwave should check one out Florida Man.