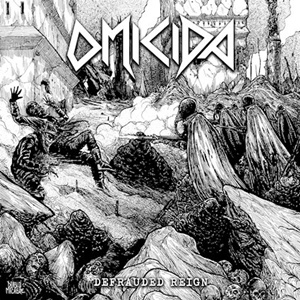 Juxtaposing taglines such as pure old-school thrash metal against a modern-day marketplace, Omicida formed in 2014 because of two ex-White Wizzard members in drummer Giovanni Durst and guitarist Erik Kluber. The original lineup included other Los Angeles musicians, but when Giovanni relocated to Europe, by 2018 the band would also re-purpose with UK musicians, including another ex-White Wizzard bandmate in guitarist Will Wallner. Defrauded Reign is the quintet’s second studio record, following up their 2015 Certain Death debut – and the fact that these musicians wish to include some progressive influences from some unsung acts of the 80’s/early 90’s aids their original approach that could help them stand out against the masses.

It can be as simple as the ambient ringing of chords cascading against a hi-hat/snare whitewash that opens “Hostage in the Pit” or the pronounced bass aspects that allow the twin guitar harmonies and quieter, dark clean picking for “Sentenced” to stand up, but these nuances make the heavier, normal expectations within the thrash platform that much more crushing and menacing. You’ll hear tremolo picking, sneering vocals that could be a distant cousin to Tom Araya, as well as serious Herculean shred flashes from Will and second guitarist Dan Baune – off to the races and then pivoting into some Forbidden/Coroner-like segments during second half favorite “The Supremacist”. Even though the eleven tracks come in at a vinyl friendly, under 40-minute playback, do not think that Omicida skimp out on the intricacies or progressive nature to these songs – your brain will be swimming in numerous chord manipulations, sudden time/tempo changes, and hooks that force windmills for days. When the band grab a Slayer influence in the mid-section of “Violent Resolution”, it comes from a South of Heaven-era feel instead of raping and pillaging the expected Reign in Blood platter – a welcome change indeed.

Technicality, speed, and precision are tops in the Omicida playbook – Defrauded Reign taking this scribe back to that 1987-1991 period of thrash when many musicians really hunkered down at their instruments and songwriting craft to dazzle audiences. Do not sleep on this band, they may not necessarily write immediate material, but deeper dives should prove to be fruitful and long-lasting – gaining followers a steady clip.