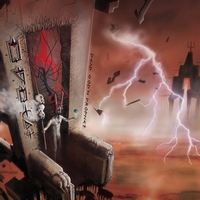 One of those cases where “Polish death metal band sounds like Polish death metal” could be used to sum up the entire review, Ogotay go down the road frequently traveled with their second full-length, Dead God’s Prophet. There are some subtle nuances that we will investigate, but it’s a sure-fire fact that if you dig Polish death metal, you’ll dig Ogotay. Which is not a bad thing if that’s what you are prepared for.

Dead God’s Prophet features all of the hallmarks of Polish death metal. Upfront and menacing vocals, a seismic ton of blast beats, and a barrage of crushing, quasi-technical riffing (see “Bastards & Orphans”). But if that was all, this would make for a sorely predictable and shrug your shoulders level release. Ogotay show plenty of aptitude for groovy, old school flavor (but not that old school Swedish vibe) with tracks like “Entering the Void” and “The Wasteland.” Other cuts, like “Antiseptic Hell,” use some pretty rotten atmospherics to add some depth to the material. Much of the remaining material, relies upon the subtlety of a tank and rolls over everything left in the way, such as the closer “Huge Fucking Nothing” and “Kneel and Die.”

So Ogotay throw in a few bells & whistles to accentuate their Polish death metal skills. They come out a bit better for it, and the band’s keen sense of brutal melodies will also give plenty of aid in allowing listeners to come back for extra helpings. The vibes may be similar but Dead God’s Prophet will provide plenty of bang for your buck.