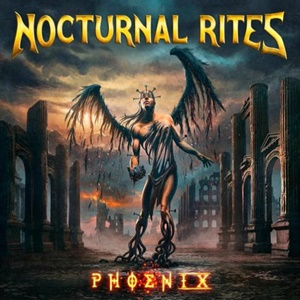 Mainstays on the Century Media roster since the late 1990’s, Nocturnal Rites vanished from the scene following their eighth album The 8th Sin– which for many long-timers seemed a disappointment as their conventional power/melodic metal sound dared to venture into slightly more modern/keyboard layers than expected. Always a favorite to this scribe for their catchy melodic hooks, sense of twin guitar harmony embellishments, and keen intuition for the proper choruses to tie it all together, there’s a reason why albums like The Sacred Talisman and Afterlife resonate today this many years after their initial release. Now reappearing with Scar Symmetry’s Per Nilsson on lead guitar (Chris Rörland joining Sabaton in 2012) and a fresh deal with AFM, Phoenix emerges to reaffirm the quintet’s importance in an ever-changing industry where the bottom line needs to be about strong songwriting, and this record delivers that diverse dynamic on all fronts.

The down-tuned guitar tones give material like “Repent My Sins” and “A Heart as Black as Coal” a heavier sheen to develop catchy hooks and groove elements, without forsaking the gritty vocal harmonies and proper support with orchestration/keyboard flourishes which delivers to the listeners a multi-level, aural Nocturnal Rites outing. Streamlining and stripping down many of the main riffs to their bare essence allows for maximum retention early on, encouraging sing-a-long moments as ‘we keep on building fences’ for “Before We Waste Away” as the musical verse crunch and solid drum backbone take you back to the self-titled Metallica era. Per shines in his lead axe duties: tasteful in his spots, also alluring when he ramps up his arpeggio sweeps and speedier shred slaying. When the band choose to be slightly faster in gallop mode, it’s fabulous to hear the exotic textures within “The Poisonous Seed” or double bass-driven closer “Welcome to the End” to remind people that the band still rocks when they want to, powerful and classy a la the Afterlife days.

The careful attention to detail when it comes to the layers of melodies, hooks, and harmonies is second to none – Jonny Lindqvist the consummate singer drawing out proper emphasis in his mid-range and higher propensities during highlights such as “The Ghost Inside Me” and slower, semi-hypnotic “Flames”. Absence makes the heart grow fonder they say – Phoenix a sure sign that Nocturnal Rites days aren’t creatively numbered, and hopefully the legions will welcome them back with open arms.