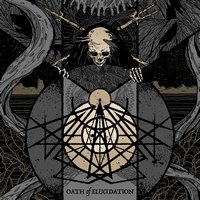 When you features members from The Red Chord and ex-members from The Black Dahlia Murder, it’s bound to get you some attention. Yet the buzz surrounding Nightkin hasn’t been nearly as strong as it should be, particularly considering the strength of the actual product itself. Releasing a 6-song EP back in 2013 (Nox Æterna), it laid bare the band’s potential, which they’ve more than surpassed with Oath of Elucidation.

Many bands in the black/death movement aim to sound intense and evil, and Nightkin’s greatest strength is just how downright demonic they sound. Mike “Gunface” McKenzie really adds to this feel with his upfront and intimidating growls, which always keep one’s attention. But it’s more than that – the guitar tone, despite the underlying melodies, maintains a dark and intriguing tone. The black metal-esque melodies (think something along the lines of Dissection) blend nicely with the often bellowing death metal riffs. In fact, the blistering approach of the band the title-track is off-set without losing its menace by the melodies, which is hard to pull off (and why the melodic death metal tag isn’t truly appropriate). The melodies are dark themselves, blending to the overall atmosphere and keeping a nice dynamic. The guitar work of “Disgusting Cycle of Futility” is a testament to this, even going so far to invest in some NWOBHM-like melodies alongside some tremolo-picking to offer a pleasant diversity without sounding out of place.

A blackened death metal album with no shortage of darkened melodies and daunting intensity, Oath of Elucidation deserves some of your immediate attention. With a high pedigree of players, they’ve really nailed their sound for the first full-length album and things are only bound to get better moving forward. Underrated stuff, but hopefully not for too much longer.