Potential is ever the frustrating fellow.  Leaving unsatisfied feelings, or the case of the “could have, should have, and would have” notion, can ruin some albums.  Sometimes it strikes in a rotten album and makes it better.  Other times potential comes along and leaves you yearning.  Take The Living Ever Mourn, things roll along pleasantly enough, (is pleasant a good metal descriptor) but some of the shadows of greatness are hard to ignore.

Nightfell take a slow, doomy approach through many tracks and couple it with a Swedish crunch and some fretwork akin to Entombed and Edge of Sanity.  There are also some minor black metal vibes to be found within.  The EoS-like leads that start off “I Am Decay” are a nice treat, elevating the slow and methodical approach with some ear candy.  “Empty Prayers” catches the listener off-guard and demands your attention with some clean singing/chanting throughout the track that embeds itself into your skull.  “Empty Prayers” comes across as the highlight of the disc, alongside “Altars to Wrath,” which sees Nighfell picking it up a few notches and implementing some mighty groove.  Closer “Funeral Dirge” combines the chanting, occasional upticks in tempo, and ends with some catchy and militant drumming.

With the occasional additions to the repertoire, the spots that come across as more traditionally “doomy” feel a bit lacking.  When “I Am Decay” slows in its second half, it loses some momentum.  “The Hollowing” also feels like a solid doom track, yet when sandwiched between “Empty Prayers” and “Altars to Wrath” (we’ll get to the instrumentals in a minute), something is lost.  The instrumental pieces, “I” and “II,”  feel like placeholders and don’t offer much besides a short intermission.

Not to give the wrong impression, The Living Ever Mourn is a solid piece of doomy death metal.  The one frustration stems from those outstanding moments within, offering a glimpse of a band that is ready to make some real waves, as opposed to a few light splashes.  Perhaps next time. 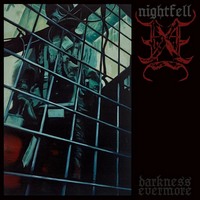