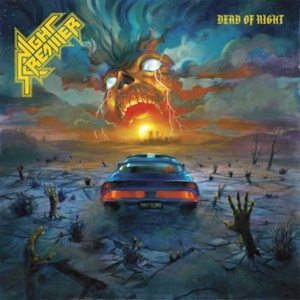 A picture can be worth a thousand words. This especially rings true in many forms of heavy metal. Take one look at the block style, pointy band logo and ensuing nightmare sky over desolate car in the desert cover montage for Night Screamer on their first full-length Dead of Night, and you know we are dealing with a band that has affinity and appreciation for the classic metal/80’s hard rock days. Together since 2013, the quintet released two previous EP’s and a single in the subsequent years, finally feeling the time is ripe to issue a nine-song record that features a dip into the past along with six newer songs that champion melodic, sing-a-long choruses and a bluesy blend of steel riffs and in the pocket tempos which elevate listeners in need of that heavy fix.

Their London roots come up frequently when you check into the addictive lead guitar accents against a potent rhythm riff foundation for “Rise Above” – guitarists Calvin Lever and Jamie Carter setting the table a la Judas Priest and Iron Maiden, properly phrasing their parts and knowing when to elevate the harmony or shred activities. The in the pocket drumming along with a sinister, mostly lower-range delivery from vocalist Gadd (think Alice Cooper for reference sake) allows “Night Screamer” and “Out of My Mind” to captivate in an early Dokken/W.A.S.P. manner, when both artists seemed a little more musically proficient while dishing out those solid melodic hooks. Knowing that diversity bodes well for active, repetitive exposure to this material, the band place longer cuts like “Sacrifice” and “March of the Dead” at the beginning and midway points of the record – the latter giving off some of that late 70’s/early 80’s NWOBHM influence, semi-doomy and bluesy with some shrieking background vocals for extra spice.

There were a couple of times where this scribe hoped Night Screamer would break from expected norms – it’s one thing to love the 1980’s classic metal/hard rock bands, but quite alright to branch out into another domain for drawing out that extra emotional impact (“Paradise Lost” is a dynamic left-turn worth exploring further for instance). And next time the band would do well to probably consider a stronger drum sound – it has a bit of digital, mechanized edge when stronger snare/kick tones could give the songs more punch. Overall though, Night Screamer prove that this style of metal is not in any hurry to wither away and die…and that’s a good thing for all generations of heavy music.