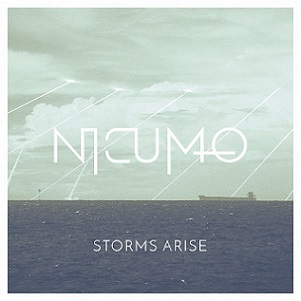 Send up the words “melancholic Finnish metal” and it’s instant froth season over here. Finland, of course, is mightily prolific in that department, spawning such underappreciated but sterling outfits like Rapture, Shape of Despair and Swallow the Sun, all predated by the true masters, Sentenced. That’s perhaps the quickest comparison for the band on hand, Nicumo. The Ylivieska-based outfit was formed in 2010, subsequently producing two EP’s before their 2013 full-length debut, The End of Silence. Four years after the fact, the Finns return with the Goth-crusted Storms Arise.

Frankly, Nicumo is going to live or die with vocalist Hannu Karppinen. Regularly volleying between syrupy cleans and an almost bro-like growled delivery, Karppinen oftentimes resembles The Foreshadowing’s Marco Benevento. While Benevento is a fine singer in his own right, he has somewhat of a romantic flavor to his vocals. The same could be said for Karppinen, who aside from the dramatic chorus push on “Beyond Horizon,” doesn’t quite have the same persuasion on the toned-down “Sirens” and punchless “Dream to Real.” However, the Sentenced-feeling “Let it Go” (think Crimson) and semi-melodic death hues of “If This is Your God, I Don’t Need One” provide enough biting melodies and songwriting turns.

There’s a terribly high bar in the Finnish melancholic metal department, which isn’t necessarily to Nicumo’s detriment, but it also poses the “they should be trying to sound like this” conundrum. Nicumo has managed to pull the various sonic bits and pieces from its country’s past, yet Storms Arise is not the overwhelming, dark-all-day effort it could have been. If anything, it’s a reminder how great other forms of Finnish moody metal really are.