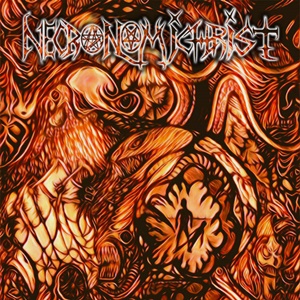 Hailing from Athol, Massachusetts and in existence since 2006, Necronomichrist have released two full-lengths and an EP over the course of their history – with this second, self-titled EP their first product in five years. It’s obvious based on name and logo/artwork alone that we are dealing with an extreme metal act before pressing play – and once these five songs sink in, it’s a marriage between melodic death, black metal, and occasional traditional nuances that give the quartet an edge over many bands who attempt to be the fastest, most technical, or intricate at their style.

For instance, the slower, melodic refrains from guitarist Lenny Patterson that penetrate “Wormwood” possess this back and forth sway that conjures up memories of older Edge of Sanity and Dark Tranquillity, the subtle keyboard assist from drummer Kendall ‘Pariah’ Divoll providing an atmospheric ending. Rest assured the band can blast and crush when called for during “Edge of Existence” – at the same time offering pirate sized riff hooks and surprising transitions of a clean variety that dig deeper into the sophistication and thoughtfulness of the songwriting, the layers of guitar accents and propulsion reminiscent of latter-day Death. Lyrically “The Wasteland” contains the best line of the EP: ‘The roots of defeat shoot deep beneath the callused feet of man’ – the music dazzling between sophisticated rhythm section action and twin guitar harmonies as vocalist Bill Sawin growls and roars as if fighting to keep his head above water. You can tell that these gentlemen embrace more of a worldwide influence scope – incorporating the seething brutality of Morbid Angel and Suffocation, but intertwining the British and Scandinavian-style musicianship and precision aspects that keep your ears pinned and perked up for what shift will be forthcoming.

Add in a cover that contains intricate detail that the viewer will abstract to their own interpretation, and it’s easy to understand why Necronomichrist is gaining attention not only on the live front, but with their studio offerings. Perfect for those who like melodic hooks and harmonies that do not compromise the death/extreme foundation behind this material.