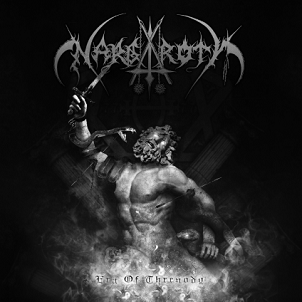 Hailed as one of Germany’s longest-running black metal bands, Nargaroth (who is really just main dude Ash; real name: René Wagner), have enjoyed a mildly successful career. Surely their output is foreign to the American domestic crowd, but 2004’s Prosatanica Shooting Angels had its moments of fire and blasphemy. (Lest we forget song titles like “Love Is Always over with Ejaculation,” “Be Dead or Satanic” or “A Tear in the Face of Satan”) Thirteen years and a few albums later, Ash continues to push forward, this time with the benefit of a legitimate backing band on Era of Threnody, Nargaroth’s first studio album in eight years.

Simply because German black metal lacks the sort of identifying qualities of other black metal-minded countries, the same could almost be applied to Nargaroth. There’s a wintry feel to “Dawn of Epiphany,” while triumphant riffs (and probably winds) comprise of “Whither Goest Thou,” which throws itself around in a Gorgoroth-like manner. The melodic undertones of “Conjuction Underneath the Alpha Wheel” and “The Agony of a Dying Phoenix” appear like a chip off the old Dissection chopping block; same for the solemn patterns on “Epicedium to a Broken Dream.”

Titles like “Love is a Dog from Hell” (sheesh, really?) and “My Eternal Grief, Anguish Neverending,” would suggest Nargaroth is trying to head up the current suicidal black metal push, although the band’s sound certainly doesn’t indicate as such. Instead, Era of Threnody comes across like a grab-bag black metal album, with certain songs having more impact than others. (“The Agony of a Dying Phoenix” is probably the best jam here, mind you.)

For a career that now stretches over two decades, Nargaroth remains without its penultimate moment. Should Ash and company continue to make dutiful, but spotty albums like Era of Threnody, that trend should forge on for the foreseeable future.