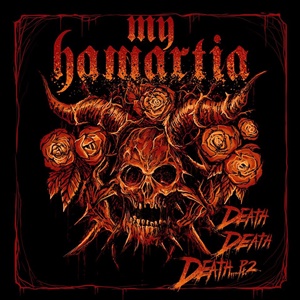 My Hamartia is a Western Massachusetts/ partially Connecticut based quartet that perform in a groove metal context that contains equal appreciation for the older aesthetics while embracing many of the modern advances in the heavy music genres. Digging deeper into the discography, it’s interesting to note that even though they choose Death Death Death Part 2 for this full-length album title, it’s actually the quartet’s debut effort – and the band deliver an interesting cocktail of tracks where classic 80’s thrash/death can careen headlong into aggression and sonic annihilation that traverses the likes of Pantera, Lamb of God, and Slipknot.

There’s a bit of hardcore snap that takes place in terms of the snare attack and choice of tempos against feral screams, putting “Now Arise” at aural attention even as the alternative clean moments and low-end stomp aspects filter in. And that seems to be a trademark for My Hamartia – throwing two or three different genres into the mix while not losing a foothold on distinctive songwriting and cohesion as far as the ideas gelling together. Many eight-string guitarists focus on a dirty, almost deathcore/djent sound that relies more on effects and less on playing ability – not the case for Sean Adamson Jr., as he floats between chunky riffs, appropriate twists that sonically crush all who stand in front, unleashing melodic solos when called for too. Testament and Slayer come to the forefront during the beginning moments of “The Opposer” – as the drumming moves from upbeat double bass speed/power action to rhythmic/staccato led time changes where vocalist Patrick Halligan matches the intensity through blood bursting screams or forceful, venomous grit. The use of effects (flange on the guitar echoing introduction for “Wasteland” as an example) is a tool for the band, not a crutch relied upon to save the songs – and something more modern bands should take into consideration when recording material that they hope translates well in live settings.

Smartly mixing up a savage, shorter cut like “Seven Feathers” with the moodier, 6:32 “Warfare” – if there’s one aspect that could use a little more coaching/strengthening, it would be in the cleaner, alternative melodies Patrick pushes forth on many of the cuts. The diversity is commendable, it just needs to be a tad bit stronger to hit that Corey Taylor/ Speed Strid platform where it stands shoulder to shoulder with the aggressive/extreme vocals. With 11 tracks and over 50 minutes of music, Death Death Death Part 2 establishes My Hamartia as an energetic groove metal band, bristling with talent and executing their ideas soundly. It’s hard to bridge the old thrash and new modern groove templates- but this could get traction from both camps.

My Hamartia – Rolling Raw and Real