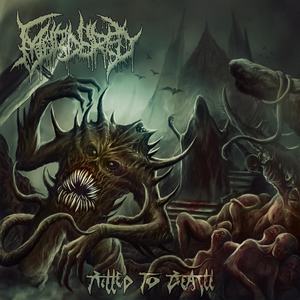 When it comes to slam, many often cite the absurdity of it all as a reason to dismiss it. The big, massive riffs and indecipherable gurgles and burps that constitute the vocal range are indeed a roadblock for many. But to ignore an entire subgenre of material means that you’ll occasionally miss out on a hidden gem, such as Murdered.

While there’s no innovation to be found within Murdered’s sound (the work of one Justin McNeil), Killed to Death brings it where it’s most needed: the riffs. While some slam bands go over the time with tin-can drumming and crazed riffs that either run at full-speed only to drop down to more aggressive slams, Murdered takes a more nuanced approach. For one, the drumming is indicative of the sound but lacks the tin can annoyance factor, and there’s much more variety that sheer blasting. The vocals are also what you’ve come to expect, yet they don’t reach absurd levels where it becomes more laughable and distracting than brutal. Which takes us to the riffing, which is the absolute meat and potatoes of the album. Simply put, there’s not a track without some rather catchy (particularly for the style) grooves and riffs to be found. “Satanic Slam Dancing Ritual” is practically chock-full of them from start to finish. Lumbering tracks like “Killed, then Raped” are a nice addition as well, injecting some variety instead of keeping to the blast/slam/blast formatting many strive for.

While Murdered sticks to the one-man slam show as many seemingly do, this is some of the strongest material in recent memory. Killed to Death is undeniably fun due to it’s near-constant unloading of killer riffing and ‘just sick enough’ gutturals. For those who clamor for the most extreme stuff around, it’s a win-win, with melodies being the rotten cherry that sits at the top.