Mord ‘A’ Stigmata – Our Hearts Slow Down (Pagan Records) 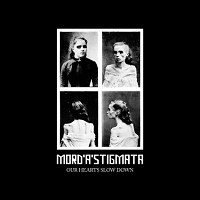 It’s very possible the fertile extreme metal country that is Poland won’t be able to hold onto Mord ‘A’ Stigmata for much longer. Active since 2004, the Poles have held court in their own territory in an impressive manner, securing a prized opening slot for Behemoth during their Polish “Satanist” tour, as well as key slots with Melechesh, Vader, and Paradise Lost. But coming from a country that oftentimes prefers extremity over everything else, Mord ‘A’ Stigmata proves to be an anomaly on their Our Hearts Slow Down three-song EP. This is quintessential exploratory modern black metal.

Furnished rather nicely by an ace production job (DR certainly wasn’t expecting this), the three songs on Our Hearts Slow Down encompass the wide range that black metal can now throw out as bait. The band’s melodic, natch, “post” side comes to the fore on the excellent opening cut “The Mantra of Anguish,” where the band happens upon several strings of memorable, melodic chord sequences. “Those Above” serves as the EP’s adventure high-point, hovering around the diabolical, yet obtuse riff territory often purveyed by Deathspell Omega and other French fiends. And the closing title track surprisingly heads into a back-beat, tom-heavy, wide-open instrumental that if not taken at face value, wouldn’t sound like it’s coming from a BM band at all.

With such a far-reaching array of things going on, Our Hearts Slow Down accomplishes more in three songs that most bands can do in ten. Surely word will spread fast about these gents, but for now, Mord ‘A’ Stigmata appears to be poised to become Poland’s next “it” band.