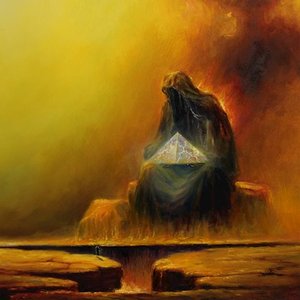 Certain bands tend to bind themselves to moments in times (with albums and songs this is even more true). For Mizmor’s previous release Yodh that moment of binding was driving through the voids of central Kentucky (overnight) on my way to New Orleans early last year. It was a dense, harrowing experience (not only due to the intermittent rain) that carried zero pretense of accessibility.

All of those same features are in full force in Cairn. Expect no warm shores.

And no warm shores are just the kind of sound the listener will find here: Mizmor is a dense marriage of no frills black metal and suffocating funeral doom and pillars of extremity are all that is to be found across Cairn.

The acoustic guitar that opens “Desert of Absurdity” is conceivably the first and last bit of warmth that will grace the listener. What follows is a sprint across barren places likely in pursuit by something unknowable through ever-narrowing confines (a concept explored later in the album), and this unknowable that will resurface time and time again. There is an ebb and flow to this song with both aspects of the band’s sound being represented as it runs across its sizable length (and note, at ten minutes, it’s the shortest on hand).

And in glacial terms the album makes a hard pivot with “Cairn to God”, an eighteen minute fall through the abyss that follows when the unknowable finds you. Coloured exclusively by the funeral…iest aspects of the band’s character, the song crawls and excoriates as it grinds the listener down, an acid bath for all aspects of the body and spirit. Unlike the opener there is no particular cadence here and while it isn’t monolithic, it will defeat you.

The parallels and differences in the extremes are the best way to consider Cairn in general: there is no middle ground and the listener is likely to either be absorbed by it completely or find it wholly and hopelessly impeneratable. The truth is somewhere in between- bountiful is the included harvest but it does not come easy. Cairn is Gilead’s most inaccessible release of its allstar summer and easily one of the most inaccessible this year.

But that shouldn’t prove a discourage for those inclined to seek its secrets. The phenomenal cover and its disintegrating being provided by Polish artist Mariusz Lewandowski (see Mirror Reaper and Portent) is illustrative here: secrets require sacrifice. Secrets and sacrifice are the experiences that Cairn offers and requires.

Embrace it at your peril.