Mindful of Pripyat – …And Deeper, I Drown in Doom (Bizarre Leprous Productions) 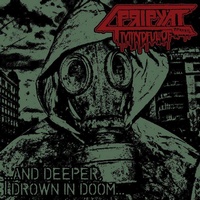 Despite the album name, Milan’s Mindful of Pripyat aren’t trying to bring any sorrow upon the listener. There’s no doom to be had here, only audio violence. Mindful of Pripyat, of which it can be assumed that the name stems from the Ukrainian city struck by the Chernobyl catastrophe, brings a flavor of death/grind that never relents in its 21 minute playtime.

Fans of Nasum, Misery Index, and Napalm Death will find much to enjoy with …And Deeper, I Drown in Doom. The songs get in and get out, with the longest track holding out for a 2:12 runtime. In these short bursts of energy, there’s not a huge change in formula, from which the short album length benefits. This is the type of material that serves as being a massive dose of adrenaline and it accomplishes its goal with ease. “Liquidators,” “Deterance,” and “Rusty Skin” are all good examples of the carnage that Mindful of Pripyat doles out. Raw and abrasive guitar riffs and blasting drum beats set the stage, with some occasional moments of groove acting as an effective counter and keeping some memorability to the songs. The vocals are worthy of mention as well, with a wide range of screams, roars, gurgles, and more belting their way out of the speakers.

It’s nothing outside the death/grind playbook, but this doesn’t have to be. On their first release, Mindful of Pripyat have unlocked the key to successful grindcore and can work on supplementing it with future offerings. For now, …And Deeper, I Drown in Doom is an excellent excuse to destroy everything in the room for twenty minutes.