Micawber – Beyond the Reach of Flame (Prosthetic) 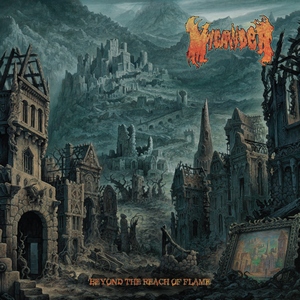 A band that has slowly been building up steam within the underground, Micawber has previously unleashed two albums (and a few EPs) independently. But for their third album, Beyond the Reach of Flame, they have gained the attention of Prosthetic Records, and head into the label-backed waters. Based on the strengths present here, it seems they’ve done so at just the right time.

Micawber has one of those sounds that you can simply classify as death metal, but there’s much going on underneath the hood to check out. First off, there’s a clear embrace of the old while keeping the knobs and sounds tuned into modern directions. It’s heavy and it’s brutal, and it seems the band consistently keeps groove in their back pocket if they need to establish some necessary headbanging moments that still retain some melody. Also quite pertinent to their sound are the solos. Sure, death metal bands often employ solos to allow for a change of pace, but Micawber offer a pleasant variety of melodic, guitar hero-esque, and downright blistering ones to keep the listener’s ears peeled the second that one begins. Not to side against the band’s riffing though, as the frequent injection of breakneck thrash influences provide a near-perfect counter to the groovier moments, providing a sound that carries plenty of visceral aggression and exhilarating musicianship (“In Shadow and Light” is a clear winner in this category).

A thrilling blend of top-notch abrasion and more progressive elements, Micawber’s time to shine has come with Beyond the Reach of Flame. They cast a wide net across the death metal movement while staying true to a sound that feels more fresh than usual. There’s a bright promise that surrounds each listen to this album, which seems certain that the band can further capitalize on with future offerings.