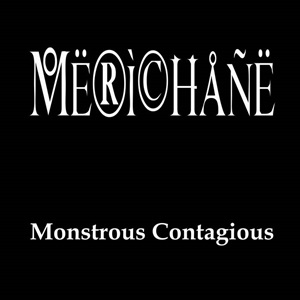 A UK band containing Skyclad guitarist Dave Pugh, Merichane originally hit the scene from 1999-2008 before separating – revitalizing in 2013 to finally put out this debut four song EP. Monstrous Contagious sees the quartet firmly entrenched in a part-thrash, part groove metal platform, the type where a darker, steamroller guitar base surrounds itself with easily identifiable gang-oriented choruses plus a rhythm section where the call-to-action groove hooks and transitions take shape.

Speedy acoustic licks against a clean electric background build anticipation for the moody action that takes place on the 6:29 “Methods of Madness”. Probably the most musically invigorating arrangement on this recording, the chunky riffing and solid tempo foundation something one would expect out of the Bay Area heydays – guitarist Kris McLaughin barking out the words in a Robb Flynn meets Max Cavalera montage that has melodic qualities while certainly elevating angst in his fierce moments. High octane tapping action segues into a mid-tempo title track closer which contains some similar quick hitting lead break licks that keep you aurally invested, similar to what one would have expected from Megadeth during their early 1990’s ascent to prominence on a commercial level.

As great as some of the musical ideas and execution are, there’s just something lacking in terms of an overall ‘it’ factor to push Merichane up the ranks to even a level where younger bands like Havok, Warbringer, or Suicidal Angels are now. Opener “God-Sized” for instance contains a great switch-up between a Machine Head/Soulfly style heavy groove passage against some semi-progressive clean, brooding verse work, but the main chorus just sits in simplistic, almost tribal shout-a-long territory that these guys could develop in their sleep, while Kris’ throaty and evil warble makes “Hate Generator” tough to swallow in successive passes.

Maybe this is a case where more live action could transport the total package to another level. For now, Monstrous Contagious contains solid potential not fully reached for Merichane.