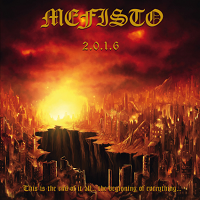 The full title of 2.0.1.6. is “2.0.1.6.: This Is the End of It All… the Beginning of Everything…” but no one wants to read that in a review header. Anyway, Mefisto were one of the first extreme metal bands to hail from Sweden, getting their start in 1984 as Torment. Unfortunately, unless your name was Bathory, chances of survival in the Swedish scene at the time was pretty minimal, with Mefisto calling it a day in 1987. And like just about every band from the 80s (it seems), Mefisto found fit to reform in 2014, thus popping out 2.0.1.6 two years later.

A bit hard to get this one situated, for Mefisto don’t exactly subscribe to the predicated norms of bruising Swedish death/thrash. In fact, they don’t sound like their Stockholm peers at all. Sure, there’s a spate of traditional ragers ala “Deathrace” and “Void,” but then there’s “Heads in the Sand,” a song that employs some pretty blatant melodic guitar lines in a sort of stoner/Monster Magnet haze. In fact, if ‘ole Dave Wyndorf had ever decided to go quasi-death metal, then “Heads in the Sand” might be a suitable composition for him.

Nevertheless, songs like “Heads in the Sand,” the clunky, somewhat dumpy “Frost of Inferno” and the GWAR-like “The Puzzle” make for a curious, yet enjoyable listen. Evidently, the Mefisto dudes have not been caught in a time-warp. Popping out a traditional, level collection of songs would be far less interesting than what they have on 2.0.1.6. And seriously, how often does an old-school Swedish metal band tap into the sonic well of Monster Magnet and GWAR? Hats off to Mefisto for not giving a you-know-what. Too bad no one else has such guts.