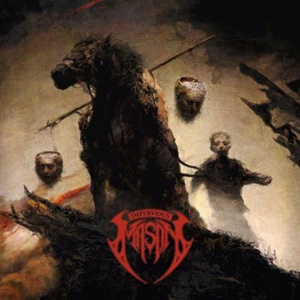 While thrash may have waned in the mid-1990’s as the underground transitioned to death/blackened pastures, it’s certainly come back with a vengeance. Plenty of records to pick up from the old guard and new – of which Australian act Mason is a part of the latter, with Impervious their second full-length and follow up to last year’s Unmerciful EP, an effort to put the band back on the map. This quartet embody a relentless quest to keep the riff/vocal train rolling, tempos at blistering paces, and a lot of melody bursting forth from the rhythms and twin barreled axe action.

It’s easy to hear on initial exposure to “Tears of Tragedy” and “Cross This Path” that James Benson and Grant Burns as guitarists live for a Bay Area thrash template – although their technical prowess and advanced song construction makes me think of Forbidden and Heathen as much as the usual Slayer/Exodus/Testament suspects in the horse race. Occasional spots of calmer, restrained action occur to give the material heightened dynamic versatility – “The Afterlife” serving as the best example of this aspect during its minute of clean, darker action, before once again the twin guitars and Exodus-like crunch overtakes the sonic landscape, James spitting out the words at similar ferocity as the rhythms and tempos. The lead breaks within Impervious are top-notch: the caliber that put shredders like Alex S. from Testament and any of the Forbidden gentlemen at the pinnacle of thrash – infusing melody and fluidity with arpeggio/neoclassical intuition. Even though there’s 36 minutes of music, Mason ensure maximum bang for the buck in terms of information to consume – smartly leaving people wanting more than exhausting the listener.

Highlights include the stairstep thrash to groove and back action for “Cross This Path”, the stop/start attack for “Burn” that screams classic Exodus plus the longest track “Created to Kill” which at slight over six minutes traverses everything from latter period Death in the jazzy-style hammer-ons to progressive/left field metal due to the whispered vocals in spots. Mason through Impervious prove once again why Australian metal is the hottest ticket going, in multiple genres.