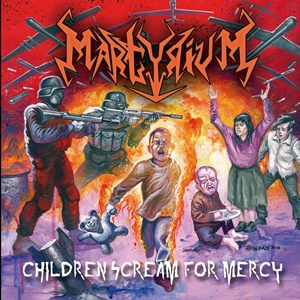 Underground metal has many pockets of appeal, often due to the need to express oneself against the daily toil or social/political frustrations existent in a specific country/territory. Hailing from Chile and pushing thrash metal since 2003, Martyrium at first may have struggled due to improper recording/equipment issues – entitling their first product The Worst Sound Ever in 2006. Finally issuing their debut album Twisted Fate in 2013 following a couple more demos, it’s been six years to arrive at this follow-up Children Scream for Mercy. Fortunately for the listeners, the quartet continue to channel a healthy aggression and raw form of thrash with many Teutonic/American influences at the helm to unleash hell and fury on the listeners.

The impassioned voice of bassist Rodrigo Vera deserves standout accolades – his speedy word spew and key screams and roars bring “Twisted Fate” to early Tom Araya glory, the subsequent high-octane riff gallops during the instrumental sections crazed while sharp at the same time. Decelerating brings about some mid-tempo grooves with tribal/Kreator-ish movements, as “Cynical Rhetoric of Priest” delivers some punishing snare/china crash symbiosis against the lower bass and guitar rumbling. The lead play from Javier Silva contains a lot of the divebomb, whammy bar accents against some fluid melodic runs – check out his sick fleet of finger/tapping nature during “Plenty Breed Pride” for his exhilarating axe expertise. It’s obvious throughout the band have a love of Slayer and Metallica just as much as Kreator and Sodom, the energy and intensity balances itself against the hooks and melodies while never sacrificing any aspect for commercial airplay or wide-spread thrash appeal. The ominous keyboard intro for the intense electric instrumental “Misprison of Treason” allows the musicianship qualities for Martyrium to flow towards the end of the record.

Next time around, the quartet may want to consider a little bit different of a kick drum tone on record as there’s a slight soft typewriter click-clack going on that deters from the frantic, octopus proclivities from drummer Nelson Jerez- but that’s the only minor beef when taking in these nine tracks. Martyrium are cut from that older mid-80’s to late 80’s thrash cloth, providing dynamic material that can ramp up to high gear in a nanosecond while also being harmony-laden when necessary.