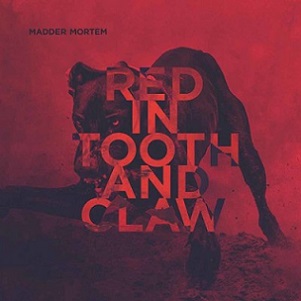 A peculiar outfit, if not for its wide-ranging, diverse sound, but also because of their sweeping, beautiful doom origins, Norway’s Madder Mortem have been still for seven years. Last heard from via 2009’s Eight Ways (released on Peaceville, which should tell you how many hold the band in high regard), Madder Mortem have returned with Red in Tooth and Claw, another perplexing go at female-fronted avant-garde metal led by the imitable Agnete Kirkevaag.

We’ll begin with Kirkevaag, who because of the dull-minded folks that parade on the internet, has received criticism for her lack of flair and adherence to metal’s female lead singer norms. Because her voice is fiery, emotive, and versatile, she doesn’t need to reduce herself to the drudgery of image over substance. She’s dominant from the start here, most notably on the opening “Blood on the Sand” where her “Wait for it!” wails are instantly satisfying. Whether she’s hunkered down in the expansive, but heavy “Pitfalls,” or “Parasites,” she’s ultimately the engine that drives Madder Mortem.

Now, some of these songs feel a bit too out of reach. The band’s tendency to test the waters with off-kilter rhythms, time-signature jumbles, and strange melodies can be feast or famine. There’s some missed opportunities on “If I Could” and “Returning to the End of the World,” while the spacious “The Whole Where Your Heart Belongs” just barely snaps into place because of its delicate nature. This has always been the catch with Madder Mortem, who refuse to abide by conventions on any level. Consider Red in Tooth and Claw another testament to that approach.