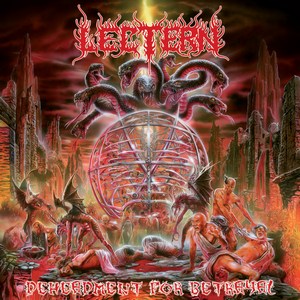 Last we checked in with the Italian death metal crew of Lectern, they had released their 2016 album, Precept of Delator. Two years later, they are still keeping the Floridian brutality alive with their newest release, Deheadment for Betrayal (the term ‘deheadment’ is quite headscratching, but so are a number of the song titles) and it’s basically what you would expect from the band, and style itself.

Heaviness and brutality reign supreme as Deheadment continues to rage on. 8 cuts of brutal, Floridian-worshipping death metal with songs that are fleshed out to the point of about 5-minutes each. That’s really one of the make or break points on this album, and sometimes it works for the band and sometimes it doesn’t. Some of the doomier, Incantation-esque songs like “Prowid As Gemel Confessors” really take advantage of it and put the time to good use, utilizing atmosphere and crushing riff tones. Even more mid-tempo songs like “Leals Shalt Kill” pull in some solid leadwork to keep it fresh. But the faster tracks, with their almost punk-ish approach to death metal, end up feeling like a complete blur. It’s not for lack of trying, as there’s still some variation to be had with openers “Placid Must Defunct” and the title track, but they feel so generic in their execution that it becomes difficult to really pick anything apart that truly stands out. It’s all just as visceral as any genre fan would enjoy, particularly the upfront and intense vocals (done in the Sinister/Deicide flavor), but there’s little to give them a niche of their own.

All in all, Deheadment for Betrayal is simply a matter of personal taste in death metal. While there’s nothing that makes it stand out above the rest of the current death metal crop, those that stumble upon it aren’t going to necessarily shy away from it either. It’s far from revolutionary, but those who dig the ‘90s styled death metal will get at least a few spins from it. 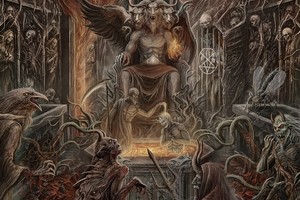