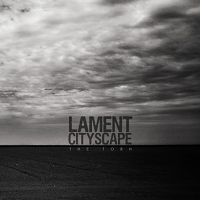 A big ‘ole slog would be Lament Cityscape’s The Torn debut. Comprised of the Oakland, CA duo that is Mike McClatchey and Sean McCullough, the pair’s hunkered, stuck-in-the-mud apocalyptic doom sludge sound takes some warming up. A dearth of vocals, not to mention songwriting dynamics, nearly eclipses everything the two try to accomplish across The Torn’s eight sounds; however, the album eventually works its way to the surface as an undeniably monolithic body of work, encapsulated by what could be best described as a “massive fucking wall of sound.” (Does that help?)

Fiends that drink the slo-mo, big chord, bigger amp riff sound Kool-Aid so purveyed on The Torn will certainly buckle upon the album’s tremendous weight. Spacing appears to be Lament Cityscape’s long suit, as riffs aren’t in much of a hurry to resolve themselves while forceful tom-work and dominant snare action holds together a loose backdrop. In turn, there’s no real beat to many of these songs; they mostly hang in the back in order to allow industrial tinges to take center stage, which they do, specifically on “The Final Son,” and album closer “Never Ended,” a song that is perhaps the best indication of what LC can accomplish when they find solid ground.

But ultimately, The Torn is a soundscape album more than it is a collection of individual songs. The whole thing congeals like one massive piece, where shards of doom chords and bland vocal interplay are scattered about. And like a lot of bands of their ilk, Lament Cityscape have some serious scuttling ‘about to either sink in the voluminous volume pool of nothingness, or actually do something with the sonic tools at their disposal.