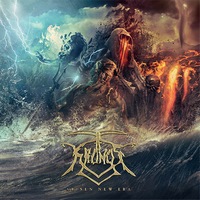 The latest in Unique Leader’s quest to grab as many of the most brutal and technically-inclined death metal bands available, Kronos fire off their fourth album, Arisen New Era. Fitting in line with the Unique Leader mantra, expect relentless death metal with a pristine clarity in the production to follow. And relentless means exactly that in the case of this album.

The wall of intensity that Kronos delivers with Arisen New Era is nothing short of impressive. Seemingly taking some cues from Hate Eternal and Behemoth, the album seems to have two speeds: fast and even faster. Tsunamis of blast beats swirl around in the waters, while the guitar riffs whirl up a storm of their own, surrounded a bellowing and brutal vocal performance. When you hit play on “Infernal Abyss Sovereignty,” expect to be knocked back a bit. Once in a while, the band does dial it back ever so slightly to more of a mid-tempo stomp (see “Aeons Titan Crown”), but that does little to dilute the intensity of the moment. What seems to be the most impressive feat is how minimal the full-on intensity holds the tracks back from being different. Sure, there is some blurring as the album progresses, but not to near the extent it could have been. Perhaps it’s the careful thought put into getting the riffs up and moving, but there is a clear dynamic that pushes the tracks along and catches your ear.

Arisen New Era is bound to give you an incredible death metal speed-fix. There’s something about the sheer intensity of it, while maintaining a sense of listenability, that a less veteran band might not be able to pull off. A fiendish mix of pace and punishment.