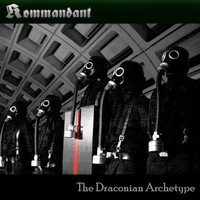 The next level in black metal after the initial old-school phase, blast-happy BM has a very obvious creative ceiling, one that very few have been able to break. The first two that come to mind are Dark Funeral and Marduk, although the latter have wisely added some variety to their sound. The rest of the bands that tried to snatch the crown have either fallen by the wayside or faded into obscurity, leaving acts like Chicago’s Kommandant to try to pick up the slack. And hopefully no one confuses these kind gents for some type of NSBM band – gas masks and military garb can easily throw off the ignorant-minded.

On The Draconian Archetype, Kommandant eschews the human element of black metal for a sharp and precise attack. Since the band set the dial on the drums to “full-blast,” there’s a manic sort of “bombs away” approach on the one-two opening punch of “We Are the Angels of Death” and “Victory Through Intolerance.” Somehow, the band is able to bring some quality riffs to the table to off-set the blistering tempo – just have a look at the ominous “Hate Is Strength,” which is far and away the album’s strongest cut.

The real conundrum Kommandant finds itself in is creating some type of separation between tracks, something that is attempted on “Obsidian Gravitational” (love the chanting) and the surging “The Transition,” which has a few worthy Scandinavian qualities to it. Sandwiched in and around these tracks are traditional, break-neck tracks that unfortunately, create too much filler. If Kommandant ventured out of their safe zone, they might be onto something.

By playing to their strengths, Kommandant creates a maelstrom worth including in the annals of fuck-the-world blast-a-thon black metal. And while it might take a few more stabs for the band to realize their faults, The Draconian Archetype brings to life the refreshing little ethos Kommandant has created. A band that should be taken seriously. 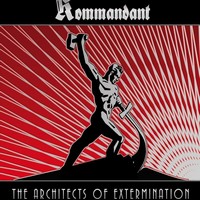