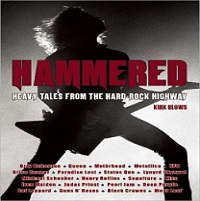 In the States, Metal Hammer doesn’t quite have the same impact as now-defunct rags like Brave Words & Bloody Knuckles, Metal Magazines, and even Pit. Because it started to drift into alternative rock avenues in the 90’s, Metal Hammer lost a vast portion of its core, early metal-loving audience, probably the expense of picking up more readers, something the sight of hacks like Linkin Park and Slipknot undoubtedly did.

Before this change in direction, editor Kirk Blows was traversing the globe, shooting the shit with metal and hard rock’s most infamous personalities, something that’s on full display for his excellent book, Hammered: Heavy Tales From the Hard Rock Highway. Compiled of dozens upon dozens of never-before-published interviews, Blows tackles all the big names in rock, adding a (very) British tone to the proceedings, while making the reader feel like they were across the table enjoying a nib and some teas. Or having a fag while waiting for the lift. (The way our British friends speak is of endless fascination…they do it so much better than we do.)

Highlights and fascinating reads are a plenty here, with Blows getting into a verbal battle with Motorhead mainman Lemmy over an ill-fated interview with guitarist Wurzel. Sexual escapades are the topic of choice with Blaze Bayley-fronted Wolfsbane; same goes for Steve Vai. Blows goes deep with Henry Rollins for a surprisingly revealing interview, while chats with the likes of Paradise Lost, Status Quo, Ozzy, and Sepultura oftentimes move past basic musical chit-chat and into something far more revealing. Blows is a master at finding the human element in his subjects.

Because of its easy to pick up nature, Hammered is a lot like Mick Wall’s brilliant Appetite for Destruction, a book with a similar format. And both have this incredible dry wit that’s woven into mesmeric storytelling. As we noted above – Blows is far more than a conventional music journalist, able to connect over virtually any topic, most of the time with alcohol thrown into the proceedings. Bottoms up!