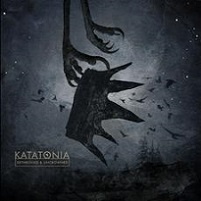 Katatonia has always operated with a degree of minimalism in their music – just reference how simple (but heart-wrenching) some of the riffs on Brave Murder Day and Discouraged Ones are, so the fact they’ve taken steps to strip away all the metallic elements in their sound on Dethroned and Uncrowned shouldn’t come as a surprise. The companion album to last year’s Dead End Kings, this release is the first of its kind for the Swedes, showcasing how much they’ve come to serve “the song”…and the darkness. Always the darkness.

Lead crooner Jonas Renkse’s vocals appear to be largely untouched from Dead End Kings, although some of his melodies are garnished with effects (i.e. echo). Therefore, the album could be seen as a platform for how effective the singer has become over the years. He doesn’t need to do much to be convincing; the sorrowful cadence of “The Parting,” along with the gentle tone of “The Racing Heart” and “Undo You” are all tempting, and probably some of the more personal vocal fronts in his canon, actually.

The absence of drums and distorted guitars should be readily apparent to those who’ve become familiar with Dead End Kings, and yeah, some of the alterations to the songs like “Hypnone” and “Lethean” (two of the album’s best songs) don’t match up to the original. However, it’s when the heavier cuts like “Buildings” and “Dead Letters” get the revision treatment that you start to understand how Katatonia’s jams are really built, and easily made into something else entirely.

Considering the band could have done the same thing to 2009’s Night is the New Day, Dethroned and Uncrowned should be considered a successful experiment to Katatonia. They’re not ones to purposely fuck-up their songs for the sake of being artistic or to prove they’re smarter than everyone else; Dethroned and Uncrowned is probably one of those long-talked about ideas within the group that seemed worth testing out. And like everything else the band has done, there is reward at the end of the rainbow, a light at the end of the tunnel. You get the idea.