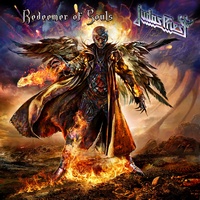 The first studio album in 40 years sans guitarist K.K. Downing, Redeemer of Souls has a boatload of expectations built in from long time metal heads. Especially if you were mightily disappointed in the sprawling double album from 2008 based on Nostradamus (count me in that group). The pinnacle efforts of the 70’s (Sad Wings of Destiny, Sin after Sin) and the 80’s (British Steel, Screaming for Vengeance) have only returned once in the 1990’s, but oh what a mighty effort it was in Painkiller. At this point in their career, they really only have to please themselves, but let’s take a peek at what this 17th studio record gives us in terms of traditional heavy metal, and whether they deserve your attention/monetary sweat equity, or if you need to move forward for younger, hungrier bands to quench your thirst for steel.

The 13 songs in totality appear to encompass a wide swath of Priest’s legacy and history. You’ll get straightforward anthems very much in line with the early 80’s in “March of the Damned” or “Cold Blooded,” a send back to their UK late 60’s/early 70’s upbringing in the bluesy bonanza “Crossfire,” and a nod to the current scene in terms of darker riffing and attack on opener “Dragonaut” or the double bass/scream propelled “Metalizer.” Rob Halford appears to be settling into his mid-range voice throughout, because even when he unleashes the occasional scream for the culturally infused “Sword of Damocles” or the slightly faster “Battle Cry,” there’s a shrillness and shortness that proves the “Victim of Changes” highs are long gone in 2014.

Those who love air guitar maneuvers should find plenty to savor in Glenn Tipton and Richie Faulker’s axe skills. Check out the 6 minute plus “Halls of Vahalla” (serious whammy bar action and an addictive mid-tempo gallop throughout) and the aforementioned “Battle Cry” to see the twin guitar lineup that means all to heavy metal is still alive through Judas Priest. The ultimate problem for full enjoyment lies in the engineering and production skills of Glenn Tipton and Mike Exeter, because sonically Redeemer of Souls really sounds slightly above demo quality, something I would expect maybe from a beginning act, not one of the premiere heavy metal acts of all time. Digitally squashed equals a lack of instrument separation, and probably means these tracks will sounds a thousand times better when they take this record on the road.

In the end, this is no Turbo, but it’s certainly not close to what it could have been. I’ll stick to the classics and reach for Cage or Primal Fear when I need some new Judas Priest-style heavy metal anthems, me thinks.