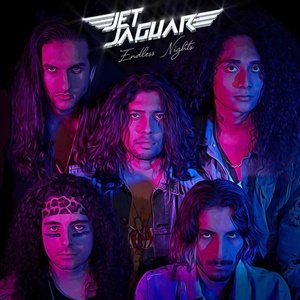 Forming in 2014, Mexican heavy metal band Jet Jaguar have made modest inroads in a fertile scene in their relatively short time together. Touring Mexico and Europe in support of their debut Zero Hour EP from 2016, they won the Wacken Open Air Metal Battle in Germany in August 2017. Finally releasing their full-length Endless Nights for German label Pride & Joy Music, the quintet unleash a sound that straddles the lines of fist pumping heavy metal with those guitar hero and melodic nuances that also appeared during the 80’s melodic hard rock heydays.

Galloping riffs, high register screams, catchy twin guitar harmonies, and chorus elements/hooks that careen in the brain matter forever are staples of the Jet Jaguar formula. The twin opening salvo of “Jet Ranger” and “Mr. Lee” showcases both sides of the group – the opener a power burst filled with Maiden/Priest-like twists in terms of ear-piercing moments plus riffs and lead breaks that align with the best heavy metal money can buy, while the latter has more of that slinky down to earth mid-tempo anthem template, gang chorus support and a riff that befits classic The Scorpions against Hammerfall. There are qualities in the band’s choices of simplified background vocals and supplemental guitar tricks against the steady rhythm section support that showcase a group that have been paying attention to the newer works of say Kissin’ Dynamite, Striker, or Hardcore Superstar just as much as classic Dokken and Winger – check out “Up to the Top” for further evidence. And when you want that straight-ahead powerhouse number filled with adrenaline double kick and speed passages, “Final Prayers” gets the job done.

The Spanish sung “Nunca Más” should get out those synchronized stage moves from Sergio Quintero and Nehuen Pacheco, a twin axe team filling the aural landscape with those perfect Primal Fear/Accept-like rhythms and complementary harmony licks when called for. What also aids the cause is the proper frontman, and Jet Jaguar have a future superstar in the making through the helium-oriented melodies of Maxx Mendoza. Reminding me in spots of ex-Hibria’s Iuri Sanson put through possibly a more melodic hard rock veneer, his phrasing, power, and superior eagle high nature make “R.O.D. (Race or Die)” as well as the 6:17 closing epic “10,000 Voices” exhilarating, stand on the edge of your seat listening. Endless Nights is that essential party record when you want to be energized and ready to take on the world. Jet Jaguar can have a fruitful, successful career as long as they keep their consistent, creative output on high as they accomplish here.