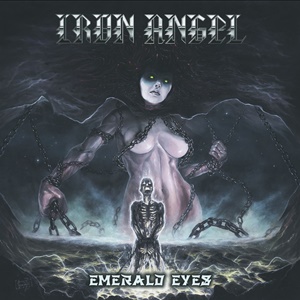 Ardent followers of Teutonic thrash know that amidst their own big four (Kreator, Destruction, Sodom, and Tankard), there were other acts making a modest impact in the scene. Iron Angel would be one of those acts – releasing two mid 80’s albums on Steamhammer with Hellish Crossfire and Winds of War before breaking up in 1986. They’ve reunited once before in 1997, lasting another decade without a new studio release and folding again. Vocalist Dirk Schröder remains the lone original member since coming back on the scene in 2015, with Emerald Eyes the fourth studio record, although bassist Didy Mackel does have seasoning through his work for decades in Not Fragile. Combining a penchant for speed/thrash with some traditional and power nuances, these eleven tracks bristle with affinity and admiration for maximum headbanging, toe tapping metal pleasure.

Wasting no time getting to the aural assault proceedings, the twin guitar lines and speed riffs of opener “Sacred Slaughter” are rock solid, allowing Dirk’s gritty/maniacal voice to glide up and down in traditional bard glory, much like Rolf from Running Wild taken down the speed/thrash lane with a killer mid-tempo instrumental transition featuring a bluesy, emotive tradeoff between guitarists Robert Altenbach and Nino Helfrich. Back and forth gallops give “Sands of Time” that Middle Eastern feel, drummer Maximilian Behr hitting some sinister rolls against the natural snare/kick proclivities. Not every song presses the accelerator to the max – the title track and the follow-up “Fiery Winds of Death” reaching back into Mercyful Fate and Metal Church reference points for memorable, melodic choruses and strong guitar/bass hooks plus tempos that stick incessantly in the recesses of your mind. Keeping a clear production value at the helm of their thoughts, the band wanted to look back at their previous work for inspiration while creating some diverse content in line with the ideals of Iron Angel. From top to bottom they achieved what they set out to do, never trying too much to force the proceedings into directions that are unnatural – not as easy as you think when you’ve been delivering music since the 1980’s.

Emerald Eyes has that melodic speed/thrash nature with a good mix of faster bangers as well as those mid-tempo breathers which make for a wonderful experience from the first song to last.