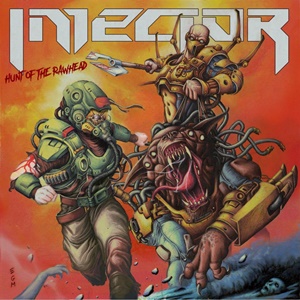 Even as the year ends, there is plenty of metal to devour for those who are willing to seek out new efforts. Signed to Art Gates Records following their independent Harmony of Chaos EP in 2013, Injector is a four-piece outfit that are at a point with their third full-length Hunt of the Rawhead that they hopefully have shed their initial influences to craft something more of their own entity. After a few spins, the case can be made that these gentlemen have the tools to go places, as they understand how to write and deliver a diverse set of thrash songs with enough power and melodic touches to maintain interest from first song to the final salvo.

Initial aspects that stand out are the strong riffing instincts and harmony/melodic nuances that guitarists Danny B and Dani MVN feature throughout these tracks. They can be crushing one minute for “March to Kill”, but then turn their axe play very mid-tempo and smoother in a Judas Priest fashion with loads of shred escapades on “Into the Black”. The bass work receives a proper boost, and rightfully so, as Jose Angel ‘Mafi’ doesn’t rest on his laurels, giving a bit of a D.D. Verni/ Steve Harris fluid push to robust cuts like “Dreadnought Race” and the slightly progressive instrumental “Interstellar Minds”. Many will be able to trace the aspects of Metallica, Metal Church, and Overkill that come up – especially in the case of the vocals, that have a strong James Hetfield delivery and sneer to them. Although most of the material is focused and in radio-friendly time frames, the band throw a couple of six to seven-minute plus where they stretch their chops, “Rhythm of War” being that slower, epic climb type of arrangement whereas “Boundbreaker” closes things on an accelerated ride, featuring killer riffs, guitar harmonies in abundance, and a bit of an exotic flavoring in spots a la current Destruction.

Three albums into their career now, Spain’s Injector with Hunt of the Rawhead straddle the line of pummeling thrash with a strong melodic, traditional metal influence throughout these nine tracks. Which will be a welcome addition obviously for those who not only love the fast and furious activities that put the first Bay Area wave on the map, but also those European predecessors that possessed a lot of twin harmony and straightforward riffs that were all the buzz during the late 70’s to mid-1980’s.