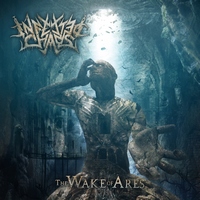 Ye old Swedish death metal. Buzzsaw guitars, memorable riffs, plenty of groove, plenty of bite. When done well, there’s plenty to be cheery about when listening to this particular branch of death metal. When it’s done wrong, you can expect the worst, or at least the most mundane. The Wake of Ares captures what the genre does best, though there’s not much in the line of innovation.

The introduction’s second line really states things best for Infected Chaos. It’s what the mind tends to conjure up when we think of how old school Swedish death metal (by way of Entombed, Dismember, et al) but with two slight differences. The production is thankfully not held to the early ‘90s standard so much as the 2015 one, which ensures that The Wake of Ares has plenty of grit but doesn’t sound like a muddled mess. The other thing one may not expect is the more guttural approach to vocals. This draws more comparisons to early Hypocrisy and Bloodbath than the aforementioned staples. It’s not much, but these two components give Infected Chaos a slightly fresher sound than a good chunk of the retro-lovers out there. The rest of the formula is a pretty familiar one. Plenty of crunchy guitar riffs that favor a midtempo and punchy approach (“The Silent Monolith”) that grooves as well as it drives forwards. Favorably, there’s solid energy from start to finish – something bands using this sound need in order to stay relevant. High-impact tracks like “Arson Anthem” and “Strike from the Sky” are guaranteed to get the blood pumping and this never relents until the last moments of “The Sea of Grief.”

The sound of Swedish death metal may be old hat at this point, but there’s no question about Infected Chaos’ mastery of it. An energetic romp with groovy and pummeling riffs by the handful, that’s for sure. Just don’t expect anything outside of the box.