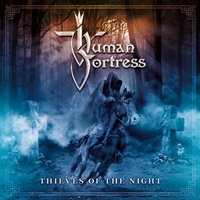 Righting the epic power metal ship on their last album Raided Land, German act Human Fortress keep an eye on the prize mentality and execution through this fifth full-length Thieves of the Night. It certainly helps to gain the services of premiere Brazilian singer Gus Monsanto (ex-Adagio), and now knowing how to accentuate his range and skill set, these 12 tracks emphasize a fuller, wider dynamic palate which benefits the sextet and the listener for versatility’s sake.

Overall Human Fortress keep a lot of the structures tight and on a very melodic sheen – even when the guitars gallop or the keyboard layers smooth out the sonic landscape, the hooks immediately captivate. Willingly pumping a little more of a cultural/folk texture in highlight “Rise or Fall”, bassist Andre Hort gets lots of lead riff spotlights as guitarists Todd Wolf and Volker Trost circle around with snappy rhythms and harmonic intertwines. Keyboardist Dirk Liehm excels at the right moments to be a little more reflective and throwback – during the quieter instrumental change up for the otherwise up tempo “Just a Graze”, it’s almost late 60’s/ early 70’s oriented a la The Beatles or The Moody Blues the tonality and reflective chord progressions on display.

Gus’ wide range allows the band to reach into more epic/ dramatic terrain, bringing to mind a lot of Avantasia and Virgin Steele qualities in the second half of the record – especially evident on the double shot of “Dungeons of Doom” and “Gift of Prophecy”, the latter featuring tasteful acoustic work and another stirring power main riff that assuredly revs up the audiences for chanting/ singing action. Even their occasional twist into the modern heavy riff/ groove combination on “Thrice Blessed” contains Gus’ multi-octave Dio/Urban Breed-esque fierceness and high octane action to thwart any naysayers into believing the band made another move into commercial suicide.

Thieves in the Night proves Human Fortress can be dependable again in delivering melodic power metal a la Kamelot with epic, folk, and occasional wider-open nuances – hopefully regaining any major losses from the Eternal Empire period and striding into the future glorious and triumphant.