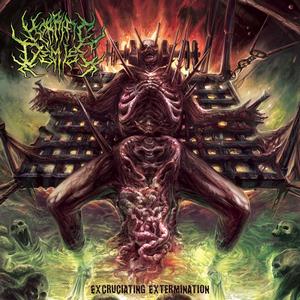 One could say that the heyday for brutal death metal was in the ‘90s. There was an abundance of the stuff (which could also make the case for why it diminished afterwards), full of rumbling grooves and abrasive riffs that did its best to knock the listener as far back as they could. Horrific Demise may be a new act, but the members stem from some veteran backgrounds (Lividity, Gorgasm, and Necrotic Disgorgement, among others) and they have captured the best from this time period without making it feel like a blatant nostalgia trip.

The bludgeoning power of Excruciating Extermination does hit that same vibes that bands like Cannibal Corpse, Immolation, Deicide, and Suffocation did so well back in the day. There’s a lot of groove work in the tracks, giving them that bottom-heavy end that oozes out of the speakers, with some occasional breakdowns that always deal a crushing blow. When things speed up, the more chaotic riffs still feel playful, in ways that feel more like a ‘song’ than technical displays, and the drumming has a similar ‘90s feel in terms of blasting and brutality. More melodic solos have their place in the material as well, showing proficiency without being too flashy, nestling into the grooves or high-speed attacks. If it isn’t obvious yet, the strongest avenue of Horrific Demise is that of their riffs. Each track is determined to make you move and rage about, whether it’s a catchy hook of a groove like in “Until Only We Remain,” or a frenetic assault like in “Apogee of Blaspheme,” there’s never a shortage of headbangable moments to dive into.

While Excruciating Extermination does feel similar in tone to some of the ‘90s greats, there have also been few bands going in this direction with such enthusiasm and fervor in today’s extreme metal scene. Horrific Demise brings the fun back to brutality, and is more than worth a few plays if you enjoy brutal death metal.