High Command – Beyond the Wall of Desolation (Southern Lord Recordings) 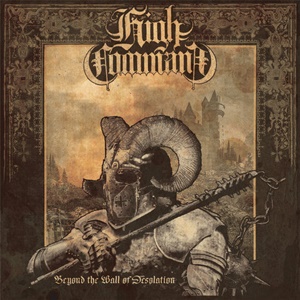 Worcester, MA has been an epicenter for New England heavy music because of location and venues/promoters willing to keep the scene alive – infusing the city with vitality as its varied musicians love punk, metal, and hardcore. High Command call Worcester home – together since 2016 and quickly making a name for themselves for a potent crossover brand of thrash. They’ve released a demo and EP in a short time, setting the stage for their debut full-length Beyond the Wall of Desolation – an eight-song affair bursting with primal rage channeled in a cohesive musical cocktail sure to find favor for those into straight-ahead spitfire hardcore-infused thrash.

Scathing and scorching tend to be adjectives thrown about when taking in High Command – and that’s not far off from the truth. They lob catchy riff/tempo combinations at varying paces, mostly mid-paced to slightly faster in versatility but their sonic punch and attitude carries over from any angle. Check into “Merciless Steel” for a song that takes the early spirit of Metallica and D.R.I., adds in the impassioned blood curdling rasp of Kevin Fitzgerald and you’ll succumb to the ‘sentencing of the pit’ even through the stop/start transitions, bluesy lead salvos, and savage mid-tempo slamming segment around the 2:40 mark. “Devoid of Reality” at 8:37 is the longest cut, an epic containing horror/sci-fi-like narrative parts, equally ambient/tribal nuances, and this overwhelming sense of evil lurking in the shadows as the arrangement picks up – the guitars chugging at mid-pace, while the doom-oriented closing includes proper piano placement to heighten the looming despair. This material has beer-soaked textures – you can feel the smoke and warmth of the amps, the screams, guitar tones, natural bass and drum measures kept intact for as close to a live experience as one could hope for from a studio record. Favorites change by the day – when this scribe needs that energy pick me up, “Inexorable Darkness” quenches that need, but there’s something equally captivating about the South of Heaven-esque proclivities “Visions from the Blade” bleeds forth.

Many outside the New England community will probably place High Command as a direct descendant to Power Trip with their purity of hardcore/thrash intentions, but to these ears there’s a bit of that blue-collar Worcester angst and attitude that keeps the band in a little bit of their own lane. Which makes Beyond the Wall of Desolation ideal for those who love both genres – and hopefully will allow High Command to gain a wider following for this packs a sonic wallop that won’t be forgotten anytime soon.